Marinara Shrimp With Zucchini and Peppers 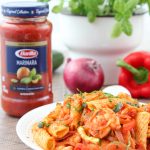 A delicious Marinara Shrimp Pasta with vegetables – onion, celery, bell pepper and zucchini. The juicy shrimp and colorful vegetables make this a stunning dinner that is so easy to prepare, perfect for busy evenings.

Bring a large pot of salted water to a boil and then cook the pasta the way you like it.

Meanwhile, prep the rest of the ingredients. Peel and devein the shrimp. Slice the red onion and celery, cut the bell pepper and zucchini into thin strips. Mince the garlic.

When the pasta is cooked, set aside at least 1 cup of the pasta water, so you can thin out the sauce later. The starchy water is perfect to be able to adjust the sauce to the consistency that you like without diluting it too much.

Season the peeled shrimp with 1/2 teaspoons of salt and 1/4 teaspoons ground black pepper.

In a large skillet, heat up 1 Tablespoon of olive oil until it’s really hot and then add then quickly add the shrimp, placing it in one layer in the hot skillet. You will need to cook the shrimp in 2 batches.

The most important thing is to make sure you don’t overcook the shrimp. By the time I placed the last shrimp into the skillet, it was time to start flipping the first shrimp. The shrimp will easily release from the skillet when they are ready. The shrimp only need 1-2 minutes per side to cook through. Set the cooked shrimp aside.

In the same skillet, add another 1/2 Tablespoon of oil, if it needs it, reduce the heat to medium and add the red onion and the celery. Season with salt and ground black pepper, to taste.

The vegetables should release some liquid as the cook, which will help to deglaze the skillet from all the brown bits left over from the shrimp. If the skillet is too dry, pour in a small amount of water, just enough to scrape off the fond from the bottom of the skillet. Cook for about 3 minutes, just until the onion and celery start to soften.

Clear some room in the bottom of the skillet and add the garlic to the space, cooking for 30 seconds – 1 minute, until the garlic becomes aromatic and is tender, but be careful not to burn the garlic. If the skillet is too dry, add a tiny bit of oil to the garlic.

Pour in the marinara sauce, mixing to combine. Reduce the heat to a simmer, cover the skillet with a lid and cook for about 5-7 minutes.

Add the zucchini to the sauce, mixing to combine. Cook until the zucchini is tender, but still has some crispness, about 3-5 minutes. Turn off the heat and add the fresh herbs.

Combine the shrimp, veggies and sauce with the cooked pasta, mixing to combine. Add the reserved pasta water, if needed.