We have loved Panera’s Frontega Chicken Sandwiches for years so recreating them at home was obviously a great choice. These panini sandwiches are so delicious and satisfying.

In Panera, they use focaccia bread for the sandwiches, but I prefer using my homemade sliced Crunchy No Knead Bread, which makes it extra crunchy, like a really great grilled cheese sandwich. The cooked chicken pairs so well with fresh tomatoes, basil, red onion and mozzarella cheese. The chipotle mayonnaise gives is a smoky flavor with just a bit of heat.

What are Panini Sandwiches? Can You Make a Panini Without a Panini Press?

Panini sandwiches are hot sandwiches, cooked on a panini press, which presses the sandwich together, cooking them and giving the sandwiches a crunchy exterior and melting the cheese on the inside.

Of course, you can use a panini press for the sandwiches, but you can also cook them in a skillet too. I use my cast iron skillet and then add a lid on top, pressing the sandwich down to get the same effect as a panini press.

How to Make Chipotle Mayonnaise:

Chipotle mayonnaise is simply a combination of mayonnaise and some canned chipotle peppers in adobo sauce. They are jalapeño peppers that have been smoked and then canned in adobo sauce, which is a slightly sweet and tangy red sauce. You can buy them in most grocery stores.

Take out 1 chipotle pepper and chop it up. I usually remove the seeds. Mix with the mayonnaise and add some of the adobo sauce.

I also like adding 1/2 Tablespoon of sour cream or Greek yogurt and a Tablespoon of balsamic vinegar to the mayonnaise. It gives it a bit more tanginess, creaminess and sweetness, but that is completely optional.

Don’t know what to do with the rest of the adobo sauce? Cook it with some chicken, pork or beef. Add it to barbecue sauce for an additional spicy and smoky flavor in meatballs, ribs, pulled chicken and more. Add a bit to salsa or hummus. There are so many possibilities. You can also freeze it to be used another day.

How to Make the Frontega Chicken Sandwiches:

Take two slices of bread and spread chipotle mayonnaise on both slices. Top with cooked chicken, mozzarella cheese, making sure the chicken and cheese on closest to the bread, so they will heat through first. If you want the sandwiches to be extra cheesy, you can use extra cheese on the other slice of bread too.

Add the sliced tomatoes, basil and red onion. Put the sandwich together and brush the outside of the bread with olive oil.

Heat a skillet on medium heat until it’s hot, then add the sandwich(es). Top with a lid, pressing slightly. Cook until the sandwich is golden brown on both sides, all the ingredients are heated through in the center and the cheese is melted. If you have a panini press, you can use that, of course, to cook the panini.

Serve right away, while the sandwiches are hot.

These sandwiches are really satisfying to serve on their own but they also pair so well with a bowl of soup, such as Chicken Noodle Soup, Italian Wedding Soup, Broccoli Cheddar Soup, Creamy Chicken Gnocchi Soup or Creamy Butternut Squash Soup.

Instead of soup, you can also serve them with a salad, such as the Lemon Vinaigrette salad or Crunchy Cabbage Cucumber Salad. 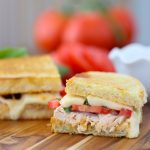 olive oil, to brush on top of the bread

Assemble the sandwiches. Spread some of the chipotle mayonnaise on two slices of bread, then place the chicken and the mozzarella cheese on top of the mayonnaise.

Place the sliced tomatoes, red onion, and basil in the center. Put the sandwich together and brush the outside of the bread with olive oil.

Slice the sandwich in half and serve while hot.