Chicken Drumsticks With Tomatoes and Peppers 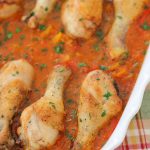 Crisp and golden chicken drumsticks are baked in a delicious sauce made with fresh tomatoes, onions, garlic and bell peppers. The sauce is absolutely out of this word and just perfect to serve over pasta or rice.