This hearty Belarusian potato babka is made from grated potatoes, flavored with bacon bits or salt pork and sautéed onions. It’s usually baked into a type of casserole until it’s golden on top and creamy and fluffy in the center.

I love recipes that feature my Belarusian roots. I can still remember watching my both my grandmothers make potato babka and climbing up on the chair behind the kitchen table to enjoy this potato goodness. I have come to find out that my husband, also with strong Belarusian roots, grew up eating this too.

Potato Babka is very similar in taste to Potato Pancakes, but cooked in a different way. The potatoes are creamy on the inside and crunchy on the outside. Using raw grated potatoes makes the texture so unique. Just like potato pancakes, it is delicious served with sour cream.

What is Potato Babka?

Potato Babka is very popular in Belarus. It is made with grated raw potatoes. The potato batter is flavored with sautéed onions and salt pork or bacon. The batter is made similarly with potato pancakes, so the flavor is very similar but it is prepared by baking the potato mixture kind of like a casserole, instead of frying it into thin pancakes. The potato babka is crisp and golden on the outside and fluffy and tender on the inside.

Other countries prepare something similar, like the Babka Ziemniaczana in Poland. I am sharing our family version of this recipe.

Preheat the oven to 350 degrees Fahrenheit.

In a large bowl, grate the potatoes on the fine holes of a box grater.

I like to grate 3/4 of each potato on the smallest and finest holes of the box grater and the remaining 1/4 of year potatoes on slightly larger holes of a box grater, but still smaller than the type you would use to grate cheese. I like that it adds just a bit of texture to the Potato Babka. The largest holes of a box grater will be too large to bake through and might still be raw, so you would need to cook the Potato Babka longer. It will also not have the correct texture for a traditional Potato Babka. The potato mixture needs to have a batter consistency.

Can you use a food processor to grate the potatoes?

Yes, but I think the box grater will give you better results, a better texture, but that is up to you, of course.

I also suggest grating a small raw onion to mix with the potatoes. The raw onions help to keep the potatoes nice and golden and prevent them from turning brown and gray too quickly. They also give them a mild onion flavor in addition to the sautéed onions. This is optional.

I cook the Potato Babka in a 10 inch cast iron skillet, so I cook the onion and bacon in the same skillet first. On medium low heat, cook the bacon until it is golden and crisp. Remove the bacon from the skillet and drain on a plate lined with paper towels. Set aside some of the bacon to serve on top of the Potato Babka after it is cooked.

Discard most of the bacon grease, saving only 1-2 Tablespoons. Add the onions to the skillet along with the reserved bacon grease and cook on medium heat until the onions are tender and slightly golden around the edges.

In a large bowl that you used to grate the potatoes, add the sautéed bacon and onions, the egg, flour, 2 Tablespoons of sour cream, salt, ground black pepper. Mix to combine.

Use a pastry brush to spread the bacon grease up the sides of the cast iron skillet. The bottom should already be greased from when you were sautéing the bacon and onions.

Pour the potato mixture into the cast iron skillet and even it out. Place into the preheated oven and bacon for about 45 minutes.

What Can You Use Instead of a Cast Iron Skillet?

You can also use any type of baking dish to bake the Potato Babka. The baking time will vary depending on the baking dish that you use.

I have also portioned out the batter between some smaller ramekin dishes and baked individual portions of potato babka. This is a very cute presentation and is much faster to cook through.

Other Variations of Potato Babka:

Instead of using bacon or salt pork, you can sauté some chopped pork shoulder or chicken and add it to the potato batter along with the sautéed onions. Instead of the chopped meat, you can also brown some ground meat or sausage. Make this vegetarian by leaving out the meat and using some sautéed mushrooms or other vegetables, like bell peppers.

Potato Babka is best served right away. Cool it for about 10-15 minutes, then cut into portions and serve with sour cream, sliced green onions or chives and some reserved bacon bits.

A glass of cold milk or buttermilk are also very Belarusian options. My grandfather would highly approve:). 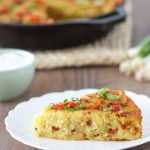 This hearty Belarusian potato babka is made from grated potatoes, flavored with bacon bits or salt pork and sautéed onions. It’s usually baked into a type of casserole until it’s golden on top and creamy and fluffy in the center.

Other Variations of Potato Babka

Instead of using bacon or salt pork, you can sauté some chopped pork shoulder or chicken and add it to the potato batter along with the sautéed onions. Instead of the chopped meat, you can also brown some ground meat or sausage. Make this vegetarian by leaving out the meat and using some sautéed mushrooms or other vegetables, like bell peppers.

This is an updated version of the Potato Babka recipe that was originally published on April 13, 2012. I have updated the photographs and clarified the instructions to make it even more user friendly and enjoyable.