One of the easiest and healthiest fish soups is the Russian Ukha. Prepared by cooking a fish broth from a whole fish, you then add a handful of additional vegetables, such as onions, carrots, celery, potatoes and fresh dill and parsley into that clear and flavorful broth.

Ukha has been part of the Russian cuisine for hundreds of years. It’s a simple, rustic soup that is delightfully light and flavorful. Made after a successful fishing trip with the catch of the day, either back in the kitchen of your home or right over the fire on the banks of the river. My husband doesn’t fish, so we usually use store bought fish in our household:).

One summer, when we went on a mission trip to Siberia, we took a group of boys from a juvenile detention center for a day spent in the beautiful Russian outdoors. It was a wonderful day filled with soccer, singing, running and enjoying the fresh air and sunshine. Fishing was also part of the day and our picnic lunch included this fisherman’s soup – Ukha, prepared with the help of the boys themselves.

What is Ukha or Uha?

Ukha (Yxa) is a Russian fish soup made with all variations of fish. The fish is cooked whole, from head to tail, to make a clear broth and then some simple vegetables are added, like onions, carrots, potatoes and fresh herbs. The broth is both concentrated in fish flavor as well as really light and fresh. It’s crystal clear and each ingredient is very distinct.

What Kind of Fish Should Be Used For Ukha?

You can use just about any type of fish for this soup. Most of the time, Ukha is made from a whole fish. The types of fish I use most often are rainbow trout, snapper, bass and/or bass. However, the possibilities are endless. Of course, in Russia, pike is well known. You can use any kind of fish that you like the flavor of. I really enjoy making this with salmon as well.

The great thing about this soup is that you can use pieces of fish if you don’t have a whole fish available or even use a combination of different types of fish. Using the whole fish, with the head and bones will make the broth much more rich, concentrated and flavorful, but you can certainly use fish fillets on their own.

Ukha is traditionally made with just onion, potatoes, carrots and fresh herbs. I love the addition of celery, because it pairs so well with seafood. You can also add other vegetables, like garlic, bell peppers, tomatoes, zucchini, etc, but that will be a very different version, of course and won’t have that iconic clear and simple flavor that Ukha is so well known for.

How to Make the Easiest and Healthiest Fish Soup:

1 . Cook the fish broth from the whole fish. (Instructions above.) Strain the broth and set aside.

2. When the fish is cool enough to handle, discard the fish skin and bones and set aside the cooked fish to be added to the soup at the very end. (Fish overcooks very easily, so don’t add it in until all the vegetables are cooked through and you are ready to serve the soup.)

4. When the broth is cooked, rinse and wipe out the pot that you used for the broth, pour the broth back in and add all the vegetables except the herbs. At this point, you can add more water if you want the soup to be thinner and add more salt, ground black pepper, to taste, if it needs it. Bring to a boil, reduce the heat to a simmer and cook for 15-20 minutes, until all the vegetables are tender and cooked through.

5. Add the fish and the fresh herbs to the soup and serve. Store the leftovers in the refrigerator, covered well, for up to a week.

Can You Make Fish Soup With Fish Fillets Instead of Using a Whole Fish?

Yes, you can use fish fillets, any kind that you like, such as salmon, cod, snapper, haddock, whiting, pike, etc.

In that case, cook the vegetables in water until cooked through (season with salt, pepper, add some bay leaves and whole peppercorns for flavor) and add the fish fillets at the very end. Cook for just 5-7 minutes, until the fish is cooked though. Fish cooks really quickly, so be careful not to overcook it. Garnish with fresh herbs.

The soup won’t be as flavorful as when cooking a fish broth using the whole fish, but it will still be good. You can also use a vegetable broth instead of the water too.

In our family, we love fish soups. Even my small boys, at the moment they are 3 and 5, have enjoyed these soups since they were babies, especially this one.

The Potato and Salmon Soup (I have a video of this recipe as well), Potato and Cod Soup and Creamy Shrimp Chowder are also amazing. If you haven’t tried my Clam Chowder, I highly recommend it too. 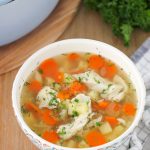 One of the easiest and healthiest fish soups is the Russian Ukha. Prepared by cooking a fish broth from a whole fish, you then add handful of additional vegetables, onions, carrots, celery, potatoes and fresh dill and parsley into that clear and flavorful broth.

Cook the fish broth as the instructions say, then when pouring the strained fish broth into the pot, add the chopped onion, sliced celery and whole, peeled new potatoes and small spring carrots to the soup. They will take a little bit longer to cook through, but when the potatoes and carrots are tender and cooked, add the fish and the herbs and serve.

This is an updated version of the Fisherman’s Soup Ukha recipe that was published originally on August 26, 2013. I have updated the pictures and clarified the instructions, but the recipe is still the same. This has been our family favorite for years. Enjoy!