This perfect recipe for pumpkin pie, has an all butter tender, flaky crust and a smooth, custardy pumpkin filling. Baked in a deep dish pie plate creates an extra generous portion of pumpkin.

With Thanksgiving right around the corner, Pumpkin Pie has been on my mind. For the perfect pumpkin pie, I like using a deep dish pie plate, so there is as much filling as possible. The pumpkin filling is flavored with vanilla, cinnamon and a pinch of nutmeg. It’s extra smooth and creamy, absolutely glorious paired with the golden and flaky pie crust and freshly whipped cream.

Tips For the Best Pumpkin Pie

How To Prevent Cracks in the Pumpkin Pie

Making the Pie in Advance

You can make the pie crust up to a few months in advance and freeze it. You can also store it for a few days in the refrigerator, either rolled out and in the pie dish, or just stored in a disc. Either way, make sure to cover it tightly with parchment paper, aluminum foil, or a freezer ziplock bag, so it doesn’t absorb any odors and doesn’t dry out.

You can also bake the pie and store it in the refrigerator, covered well, for 3-4 days. You can even freeze the already baked pumpkin pie. Cool it completely before placing it into the freezer, covered tightly, and freeze for up to 1 month. Thaw the pie in the refrigerator. (Make sure to remove the foil or plastic first, so there aren’t any water droplets soaking into the pie as it thaws.) 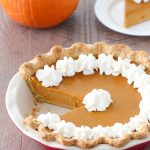 This perfect recipe for pumpkin pie, has an all butter, tender, flaky crust and a smooth, custardy pumpkin filling. Baked in a deep dish pie plate creates an extra generous portion of pumpkin.

While the pie crust is baking, make the pumpkin filling.