This recipe transforms a baked pork tenderloin into something really incredible. Juicy and tender pork tenderloin with an unforgettable maple glaze. The glaze has so many levels of flavor and it coats the pork in a beautiful glossy finish.

Baked pork tenderloin can be the star of the show when it’s baked with an amazing maple glaze. The glaze is both sweet and savory, it has some heat and aromatic flavors from onions and garlic. The meat is juicy on the inside and crispy and golden on the outside.

Grating the onions on the finest holes of a box grater gives the perfect texture to the glaze. Caramelizing the onions and garlic and then cooking them along with the rest of the ingredients draws out the natural sweetness from the vegetables. You will love this glaze.

To finish off the meal, I serve it with fluffy white rice and a refreshing pineapple salsa. The sweet and refreshing flavors of the pineapple salsa complements the pork perfectly. Plus, it’s just absolutely beautiful. Pork can often be a heavy meal, but this one isn’t at all.

How to Bake Pork Tenderloin

If you want to bake the pork tenderloin in the oven without browning it in the skillet first, you absolutely can.

Season the pork with salt, pepper, dry herbs and spices, then drizzle with olive oil or avocado oil and rub it in on all sides. Place it on a rimmed baking sheet in a preheated oven (425 degrees Fahrenheit) and roast also until it reaches 130 degrees Fahrenheit. Continue with the rest of the recipe.

I tested it both ways, by sauteing one in the skillet first and the other way I just baked in the oven the whole time. Here they are, side by side. Can you tell the difference?

There is a slight difference in how it looks, but it’s very minor. I do think that sauteing something first adds more flavor. In this case, you can totally get away with baking it in the oven the whole time. The glaze is so flavorful and it has a deep golden color that helps to give color and shine to the pork. As it roasts in the high heat of the oven, it also gets more caramelization too.

What To Serve With Maple Glazed Pork Tenderloin

My favorite way to serve this is with simple long grain white rice (I just add some fresh herbs, like green onions or cilantro to it) and some pineapple salsa. All of these things complement each other so well. 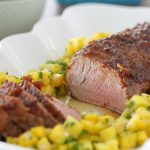 Learn how to bake pork tenderloin in the oven, topped with an incredible maple glaze. The pork is so juicy and tender, with a golden crust. I love serving it with rice and pineapple salsa – it’s the perfect combination.

How To Bake Pork Tenderloin WITHOUT searing it on the stove first.

If you want to skip searing the pork, you can bake it in the oven the entire time.

Season the pork with salt, pepper, dry herbs and spices, then drizzle with olive oil or avocado oil and rub it in on all sides. Place it on a rimmed baking sheet in a preheated oven (425 degrees Fahrenheit) and roast also until it reaches 130 degrees Fahrenheit. Continue with the rest of the recipe.

The pork will be slightly less golden on the outside, but you’ll hardly notice, because the glaze gives it a lovely brown shiny exterior.