Oven baked bacon is the best. Not only is it awesome that you don’t have to deal with bacon grease splattering the stove, counters, the floor and YOU, it also frees up your time to cook the rest of your breakfast, like a batch of tender and fluffy buttermilk pancakes or an omelet.

I really appreciate the time I save by multitasking, but I also think cooking the bacon in the oven will give you the best results. The bacon turns out perfectly crisp and cooks really evenly, much more so than in a skillet. You can also cook an entire pound of bacon at once, if you use a large rimmed baking sheet, you can fit the entire package of bacon on there.

It’s really convenient for meal prepping, when you can cook a bunch of bacon at once and use it throughout the week in many meals, such as Hash Brown and Bacon Egg Muffins or one of our family’s favorite indulgent entrees, Potato and Bacon Pie or add it to your Breakfast Quesadillas or Breakfast Burritos.

How To Cook Bacon in the Oven:

Can You Freeze Bacon? YES! It’s the best way to store it.

How to Get the Most Evenly Cooked Bacon:

If you don’t mind cooking with aluminum foil, use the heavy duty one. It is less likely to rip. It is the easiest cleanup too. The aluminum foil is sturdy enough to hold in the bacon grease and won’t leak through. No dishes to wash😀. Now that’s a win. If you prefer using parchment paper, it will still protect our baking sheet. You’ll need to wash the baking sheet, but at least you won’t have to scrub off the burn on bits.

Drain the Cooked Bacon on a Paper Towel

When you take the bacon out of the oven, placing it on a paper towel will remove excess bacon grease, otherwise it will be very greasy.

Got Leftover Bacon? Here are some great recipes where you can put that bacon to good use.

How To Cook Bacon in the Oven 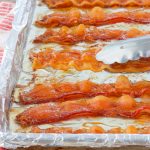