Homemade chicken broth is so rich, flavorful and very simple to make. It’s very nourishing, comforting and delicious. You only need a few simple ingredients, there’s endless ways to use broth in varieties of recipes and it’s so budget friendly too.

I call homemade chicken broth “liquid gold” in my kitchen. It’s so much more flavorful than anything you can buy at the store. You can adjust how much salt you use and the flavor by adding a variety of vegetables that you like. Plus, it has all wholesome ingredients, none of the weird stuff that you can’t even pronounce or recognize on the ingredients list of the store bought broth. Most store bought chicken broths have only a slight whiff of chicken in the broth. With homemade broth, you will have so much chicken in the broth, which will make it really concentrated and comforting.

Chicken broth is the base of so many of my recipes, so I have some chicken broth on hand at all times. It freezes really well, so make a giant batch of broth and keep it stored in my freezer. Every few months I replenish my supplies. It really is one of the best foundations for my “flavor factory”.

There are endless ways that you can use chicken broth and it will make a big difference in the flavor of the meal that you’re cooking when you use delicious homemade broth. I also have amazing recipes for both Vegetable Broth and Beef Broth too.

Both chicken broth and chicken stock are made by cooking chicken and other aromatic ingredients to make a flavorful liquid that is used in soup and many other recipes.

Chicken broth is cooked with chicken meat but not necessarily chicken bones. Chicken stock is made with chicken bones and sometimes meat. Technically, this recipe is chicken stock, because I always use bones in addition to meat, but since I call it chicken broth and use this as a foundational ingredient in many other recipes, I am choosing to call it Chicken Broth.

What Chicken is Best to Use For Chicken Broth?

You can either use a whole chicken or use the equivalent of chicken parts, like using 3-5 pound of chicken wings, chicken drumsticks, and other chicken bones, such as the backbone. For the best flavor, texture and color, use both bones and some meat.

I also like to remove as much of the skin and large fat pockets of the chicken as you can. This is completely optional, but I don’t like chicken broth to be too greasy, so I choose to do this extra step. You will still have plenty of richness and fat in the chicken broth, even after removing all the skin and fat.

How To Cook Homemade Chicken Broth From Scratch:

Vegetables to use in chicken broth: I use very basic ingredients in my broth, but you can add other ingredients too, such as parsnips, celery root, leeks, mushrooms, other vegetables, and fresh herbs, like dill, parsley, thyme, rosemary. It totally depends on your taste preference.

Use good tasting, filtered water for broth. If your tap water tastes funny, so will your broth:).

Save veggie scraps and add to broth: I keep a ziptop bag in my freezer to which I add veggie scraps from vegetables while I am cooking or meal prepping, such as onion peels, celery tops, leek tops, carrot peels, etc. I add those to the broth as well. They add flavor to the broth and it’s a great way to make the most of your produce.

Use the onions with the peels and even add additional onion peels to the broth. They will give the broth a lovely golden color.

Save chicken wing tips and other chicken parts, such as the backbone of the chicken or chicken breast bone, when you are cutting it up when preparing it for other recipes, and save them in your freezer to be used the next time you make broth. I store those pieces in my ziptop freezer as well and add those to chicken broth too. The bones still have a lot of nutrients and will give the broth a richer flavor because of the gelatin that’s released when simmered for a long time.

Cook the broth at a low simmer to have clear broth. Bring it to a boil, but reduce the heat to low and cook it on low the whole time. This will make your broth clear. Cooking it on high heat will make the broth cloudy.

You can use both fresh or frozen chicken meat for broth. Sometimes when I make a smaller batch, I’ll cook the broth using chicken drumsticks and I’ll add the chicken completely frozen to the pot.

What to do with the cooked chicken from the broth: Use the chicken in any chicken soup and any recipes that call for cooked chicken. Add the chicken to pasta and rice dishes. Here are some of our favorite recipes:

How to Store Chicken Broth and How to Freeze It:

Store the chicken broth in glass mason jars or plastic containers in your refrigerator for up to 5 days.

Chicken broth freezes really well. Pour the chicken broth that you’ll be freezing into plastic storage containers, leaving room at the top for the broth to expand when it freezes. Freeze for up to 3 months. It can probably be stored longer, but chicken broth never lasts longer than that at my house, so I can’t vouch for the time period with certainty.

My favorite storage containers for the freezer are the Ziploc Twist and Loc containers. I’ve been using these for a few years now and they work very well. (This is NOT a sponsored post. I’m just sharing the products that I use myself and have had a good experience with. However, the amazon link is an affiliate link, which will give me a small commission if you buy it using this link.)

Recipes To Use Your Chicken Broth: 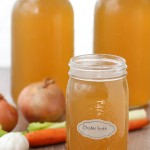 Homemade chicken broth is so rich, flavorful and very simple to make. It’s one of those things that is absolutely worth making from scratch because it makes a big difference in flavor. Not only is it wonderful to make your own chicken broth when you make Chicken Soup, but there’s an endless possibility of ways that you can use the chicken broth in so many recipes where it will really bump up the flavor.