We love hash browns for breakfast in our family and make them quite often. You can buy them in your grocery store in the freezer or refrigerator sections, but you can easily make them yourself too.

You can prepare hash browns from raw grated potatoes or cooked grated potatoes. If you use cooked potatoes, they freeze perfectly too, so you can prep them in advance and it will cut down on your work in the future and it’s a good staple to have in your freezer.

You can also add hash browns to other recipes, such as making them into Hash Brown Egg Muffins, making it into a crustless quiche or breakfast casserole.

What Potatoes Should You Use For Hash Browns

My favorite potatoes are the yellow/gold potatoes. They have a medium starch content, which makes them just the perfect texture. The pretty golden color is nice too.

However, you can use any kind of potatoes that you have available for hash browns. They will all work.

You can use either raw or cooked potatoes for hash browns.

Raw potatoes will take a bit longer to cook through. They also have more starch on them, so the potatoes will stick together much more than if you use cooked potatoes, which will have a fluffier texture.

When I want fluffier hash browns that aren’t as sticky when I use raw potatoes, I rinse the grated potatoes in water first, dry them thoroughly in a clean kitchen towel and then cook them. This will eliminate a lot of excess starch from the potatoes.

How To Cook Hash Browns

Raw Potatoes: Peel and grate the potatoes on the large holes of a box grater. Rinse the potatoes, drain them and dry them squeezing out all excess moisture using a clean kitchen towel.

You can peel and grate raw potatoes for hash browns up to 3 days in advance. Store them in the refrigerator, completely submerged in water. Drain the potatoes and dry them thoroughly before cooking.

You can also prep cooked potatoes. Peel and grate the potatoes and store them in an airtight container in the refrigerator for about 5 days.

In a nonstick skillet or very well seasoned cast iron skillet, heat oil on medium high heat. Add the grated potatoes to the hot skillet. Spread them out evenly to cover the bottom of the skillet. Season with salt and ground black pepper to taste on one side. Leave the potatoes in place and don’t move them around until they are crisp and golden brown on the bottom. The raw potatoes will take longer to cook through than the cooked potatoes.

Serve the hash browns hot. Garnish with fresh herbs, if you want to. I love green onions on top of hash browns.

How To Freeze Hash Browns

Grate the cooked potatoes on the large holes of a box grater. Spread them out in a thin even layer on a baking sheet or cutting board lined with parchment paper. Place it into the freezer until the potatoes are frozen. Transfer the frozen potatoes to an airtight container or a freezer ziplock bag.

To use the frozen hash browns, you can thaw them before use or use them right out of the freezer. They will cook up just fine if you use them in the frozen state. 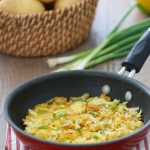 2 lbs potatoes (I prefer gold, you can use any that you like)

Peel potatoes. Grate the potatoes on the large holes of a box grater. You can use raw or cooked potatoes.If you’re using raw potatoes, you may wish to rinse the potatoes in cold water to remove excess starch. Make sure to dry the potatoes thoroughly before cooking.

Heat the oil, enough to coat the bottom of a nonstick skillet or a well seasoned cast iron skillet on medium high heat.

Flip the potatoes and season them with salt and ground black pepper on the other side. Keep cooking until the second layer is golden brown and crisp.

How To Prep Hash Brown Potatoes For the Refrigerator:

Raw Potatoes: Peel and grate the raw potatoes on the large holes of a box grater. Store them in the refrigerator up to 3 days in advance, completely submerged in water. Drain the potatoes and dry them thoroughly before cooking.

Cooked Potatoes: Cook the potatoes and cool them. Peel and grate them on the large holes of a box grater. Store the potatoes in an airtight container in the refrigerator for up to 5 days.

How to Freeze Hash Browns:

Cook the potatoes and cool them. Peel and grate them on the large holes of box grater, spreading them out in a thin even layer on a baking sheet or cutting board covered with parchment paper. Freeze the potatoes and then transfer them to an airtight container or a freezer ziptop bag. Store the frozen hash browns in the freezer for 3-6 months.

To cook frozen hash browns, you can thaw them slightly or start cooking them in the frozen state, they will just take a bit longer than if thawed.