Rasolnik is one of my favorite light and comforting Russian soups, a dill pickle soup. It is made with potatoes, pickles and barley, with onion and carrot adding a simple but delicious flavor.

A dill pickle soup may seem like a bizarre concept, but if you’ve never heard of it before, I would encourage you to try it. This recipe is for Slavic folks or pregnant ladies:). If you’re Russian, you probably grew up eating this soup, and don’t see anything unusual about it. Rassolnik brings back warm, nostalgic memories for me, and since I like my pickles, it’s one of my favorites.

Rassolnik is very comforting, since it has potatoes and creamy barley in it, but it also doesn’t taste heavy at all. I feel light and happy after I eat a bowl (or two), which is awesome.

How to Make Dill Pickle Soup

You can start this soup by cooking the broth from scratch. Strain the broth, take the meat off the bone and cut it into bite sized pieces. RECIPE for Homemade Chicken Broth. (You can also make Beef Broth instead, using the broth and the cooked beef for the soup. Pork is often used in Russian recipes for this soup too.)

What are the best pickles to use?

If you use large pickles, scoop out the majority of the large seeds with a spoon before grating or chopping the pickles. You may also want to use a vegetable peeler to peel the skin, if it’s really thick.

What can I substitute for barley?

Instead of the barley, you can use rice. Add the rice at the very end, when the potatoes are cooked through and cook until the rice is tender. Use 1/3 cup of rice.

Adjust the thickness of the soup to your preference.

Soup is one of those things that has a wide range of thick vs thin preferences. Some people like soup that is brothy and thinner, others like it really thick and chunky.
Add more or less potatoes, barley and broth depending on how you like it.

How to store and reheat the soup:

Can you freeze this soup?

I don’t recommend freezing it, because the potatoes will become very mushy and blown out during the freezing/thawing process.

Make this soup in the Instant Pot!

I often make Rasolnik in the Instant Pot.
– Saute the onion and carrot on the using the “Saute” function until the vegetables are tender. Pour in the broth, add the barley. Cook on high pressure for 13 minutes. Release the pressure, then add the potatoes and pickles. Cook for another 5-8 minutes on High Pressure. Let stand for 5 minutes, then release the pressure. Add the chicken and garnish with fresh herbs. 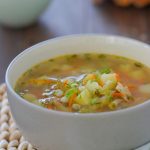 Dill Pickle Soup, Rasolnik in Russian, is a light, comforting soup with pickles, potatoes and barley. Serve it with a dollop of sour cream.

This recipe was originally published on October 17, 2012. I have updated the photos and clarified the instructions to make it even more easy to follow.