This refreshing and crunchy salad is made with the first garden vegetables – tomatoes, cucumbers, radishes, lettuce and fresh herbs dressed with sour cream.

In our family, we serve variations of this salad all spring and summer long. My parents had a large garden almost every year and as soon as the radishes, lettuce, fresh herbs, tomatoes and cucumbers started growing, we would have this delicious sour cream salad many times a week. For me, it symbolized the arrival of spring and was always such a happy occasion.

There is such a wonderful combination of refreshing vegetables and fresh herbs. I also love the variation of textures – the tomatoes are sweet and juicy, the cucumbers are wonderfully crisp and crunchy. The radishes are also crunchy and have a bit of a bite. The lettuce, dill and green onion give this salad that extra flavor of spring.

Sour cream is a very popular ingredient in Slavic recipes and it pairs so well with all the veggies and herbs. It’s such a simple way to dress a salad and is a perfect combination of creaminess and tanginess.

Best Vegetables To Use For a Sour Cream Salad:

This salad was staple in our family, especially in the spring and summer months. Radishes are one of the first vegetables to start growing in the garden. Lettuce is another early vegetable that would grow along with the delicate and feathery dill and of course, thin and crunchy sprouts of green onion.

We would start out by making the salad with radishes, lettuce, herbs and sour cream and eventually, as the cucumbers and tomatoes started growing, we would add them to the salad too.

Eventually, the lettuce and radishes would be harvested and we would make the sour cream salad with just tomatoes, cucumbers and herbs.

You can also add red or yellow onion to the salad. Cauliflower and broccoli, grated on the large holes of a box grater or cut into small florets, grated carrot and/or sliced celery are also great options for this salad.

Sour Cream As a Salad Dressing:

Sour cream is awesome as a salad dressing. It coats the vegetables perfectly, it’s creamy and tangy and is so simple – just sour cream, salt, pepper and fresh herbs.

Since the fresh vegetables will naturally release their liquid when they are cut and mixed together, it will thin out the sour cream giving it a “salad dressing” consistency.

You can also use plain yogurt instead of sour cream. Greek yogurt is best, since it has a thicker consistency.

This salad is best served right away, since it will lose it’s crispness and will come more watery the longer it stands. If you want to prep some of the salad in advance, I recommend cutting the vegetables up to a few hours in advance, but not mixing it together and not adding the sour cream until right before you are ready to serve.

Favorite Meals to Serve with this Sour Cream Vegetable Salad: 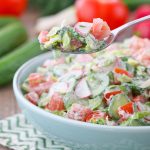 This refreshing and crunchy salad is made with the first garden vegetables – tomatoes, cucumbers, radishes, lettuce and fresh herbs dressed with sour cream.

This recipe was originally published here at Olga’s Flavor Factory on May 3, 2013. I have updated the pictures and clarified the instructions, but the recipe is still the same. This has been our family favorite and many readers’ favorite for years. Enjoy!