Apple Pear Kompot is a refreshing Russian drink made from cooking fruit in water. The delicate flavor of apples and pears makes a most perfect autumn beverage.

Apples and pears complement each other so well, and a kompot made with both is one of my favorites. Kompot is a traditional Russian drink, which is made by cooking fruit and then drinking the liquid. It can be made from just about any combination of fruits or berries – fresh, frozen or dried.

Drinking the cool, refreshing beverage is so satisfying and it’s really easy to make. I make Apple Pear Sauce from the cooked fruit, so there are two delicious treats from one cooking job.

What Type of Apples and Pears are Best for Kompot?

Kompot is so accommodating, you can literally use any variety and combination of apples and pears to make this simple beverage.

What Other Fruit Can Be Used For Kompot Instead of Apples or Pears?

You can use any type of fruit or berries for kompot and create different flavor variations based on the combinations that you choose. You can also use fresh, frozen or dried fruit or berries.

Is It Necessary To Peel and Core the Apples and Pears?

No. If you’re only cooking the fruit to make kompot, you most certainly do not need to peel and core the fruit. You can simply quarter the apples and pears and put them in the pot to cook.

However, if you will be making sauce out of the cooked fruit, it will be much easier and the sauce will be much smoother if you peel and core the fruit first. You will be straining everything through a fine mesh sieve, so it won’t matter for the drink.

What Can You Use To Sweeten the Drink Instead of Sugar?

If you are using granulated sugar, sweeten it according to your preference, so add as much or as little sugar as you want.

You can use any type of sugar that you like – granulated, brown, raw, turbinado sugars all work.

Instead of sugar, you can use maple syrup, agave syrup, stevia or any other type of sweetener that you like.

How To Make the Apple Pear Kompot 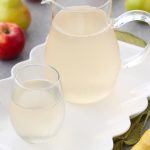 Apple Pear Kompot is a refreshing Russian drink made from cooking fruit in water. The delicate flavor of apples and pears makes a perfect autumn beverage.

This is an updated version of the Apple Pear Kompot recipe that was published originally on September 21, 2012.