Make your entire meal in one dish with this skillet chicken broccoli pasta. I also added some bell pepper to add more flavor and a pop of color. The sauce made with onion, garlic, chicken broth and cream brings it all together.

I have so much love for one dish dinners! This chicken broccoli pasta is made all in one skillet. Since it’s a pasta recipe, it cooks really fast too, so this is perfect for a busy weeknight. It’s also really versatile, so you can use different cuts of chicken, either chicken breast or chicken thighs and use many different combinations of vegetables.

Instead of cooking the pasta separately, we add it right into the skillet along with everything else. The cooking method is perfect to have a delicious pasta dish. Even though cooking the pasta in such a small amount of water produces lots of starch, that’s actually a good thing in this case, since it creates the base for a beautiful, light sauce. I use broccoli, peppers, onion and garlic in here, and it’s such a colorful combination and so beautiful too.

You can use many different types of pasta and a variety of vegetables. How fun is that? You’ll have only one skillet to wash and if you do the prep ahead of time, it’s a 30 minute meal, and you don’t have to be Rachel Ray to appreciate it.

How to Make Chicken Broccoli Pasta in the skillet

The liquid should be mostly absorbed, with only a bit on the bottom of the skillet.If you use a smaller skillet, or don’t use a high enough heat, the liquid may not reduce enough. That’s not a big deal. Just drain off some of the liquid. Leave enough to make a sauce. (You don’t want to cook it too long, since you don’t want the pasta or the broccoli to become mushy and overcooked. )

When I serve the pasta, I like to garnish each plate with more fresh herbs and finely grated Parmesan cheese. It looks so beautiful and elegant, but is so simple to prepare. On extra busy nights, just serve this by itself.

If you want to add a few extras, serve it with a fresh garden salad and a lemon garlic vinaigrette and some crunchy Garlic Bread or Garlic Knots on the side. 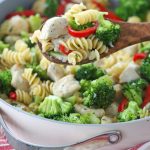 Make your entire meal in one dish with this skillet chicken broccoli pasta. I also added some bell pepper to add more flavor and a pop of color. The sauce made with onion, garlic, chicken broth and cream brings it all together.