Surprise! Sergi and I are going to have a baby!

I am currently 15 weeks pregnant. The past few months have felt so surreal and incredible. It’s still hard for me to believe that I am writing this post. 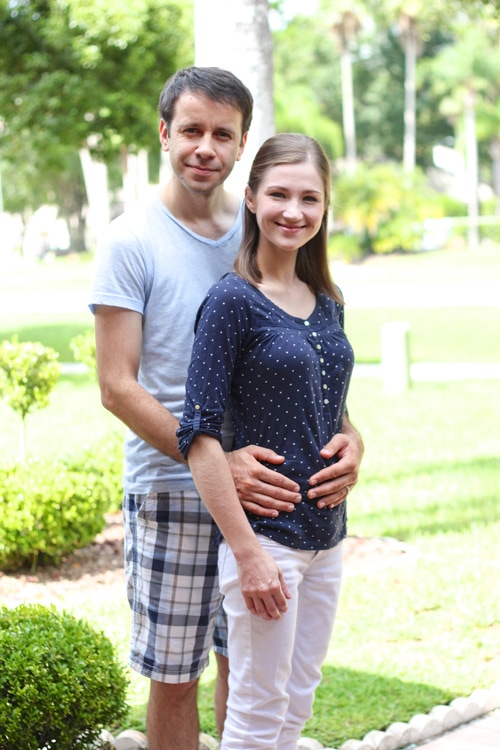 12 weeks, 4 days pregnant at the time of this picture

I was actually almost 9 weeks pregnant when I took the home pregnancy test. After 7  years of not being able to conceive a child, it was something I didn’t really think about as a possibility anymore. Life was also extremely hectic at that time, so it really took us by surprise.

I had plenty of pregnancy symptoms but didn’t give them too much thought. Nausea and vomiting is normal for me, with all my GI issues, so pregnancy didn’t even cross my mind. I also noticed that I was extremely tired, but we were moving, remodeling the new house, had a 6 month old that still woke up several times a night to eat and a very active 5 year old. Of course I was tired! This might be a little TMI:), but it was also normal for me to miss my periods during really stressful and busy times in life, so I didn’t take that into account either. We soon had to say good bye to our two boys, so that really added to my already hyper emotional stress, and I thought I was weepy and hormonal because of so many events occurring in such a short amount of time.

One night, I was preparing salmon for dinner. I had been craving it and was really looking forward to digging in. As the salmon roasted in the oven and the smell of it started wafting through the house, all of a sudden I was hit with a wave of nausea. I thought that was really strange since I had been feeling great and love the smell of fish. I couldn’t even eat it and the smell bothered me for the rest of the night. During the next few days, I again got really nauseous when I was roasting a chicken and making chicken broth. Even the thought of meat really turned my stomach. That is when the wheels in my mind started turning. I thought of all my other symptoms and I mentioned to Sergi that I might be pregnant. With my first pregnancy, I had all the same symptoms, especially being really bothered by the smell, sight and thought of meat.

It seemed like such an absurd thought, to be even considering pregnancy, that I was scared to take the pregnancy test.  I had taken several of them throughout the years and all of them had been negative, so I braced myself and tried not to get my hopes up so I wouldn’t be too disappointed. Almost immediately, I could see TWO pink lines. I was so astonished I was speechless for a minute, but as soon as I gathered my wits about me, I ran out of the bathroom to find Sergi. We were so ecstatic and SHOCKED. I didn’t even know how to react. It didn’t seem real at all.

I called my doctor the very next day, and was referred to a high risk OB. (More about that in the next post.) I had to wait a few weeks until my first appointment, and during that time I was an emotional wreck. I really feel sorry for Sergi, who had to live with me and deal with it all, but he was as sweet and understanding as always. My worst fear was that I would come to my doctor’s appointment and be told that I wasn’t really pregnant.

When we had came to that first appointment and they took us into the room to get the ultrasound, my heart was beating so fast, I was sure the tech could hear it. I will never forget the relief and happiness that flooded through my whole being when I saw that precious baby pop up on the screen. I still cry when I think about it. From that moment on, I couldn’t wipe the smile off my face. We were actually going to have a baby. 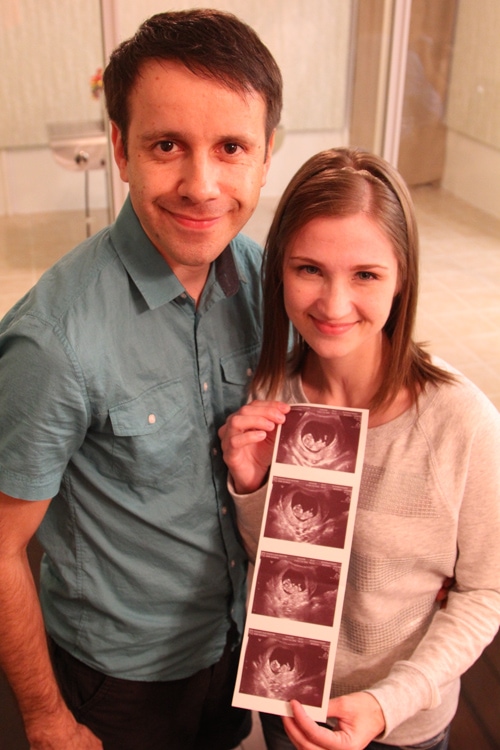 We are so thankful for our miracle child. God has already done so many miracles in my life, that I just stand back in awe and marvel how awesome He is. My actual due date is March 12, but since I will need to have a c-section, the baby will be born the week before that, at 39 weeks, so sometime the first week of March. Please keep us in your prayers. This pregnancy has been quite difficult and I’ve been really sick for most of it. I really don’t mind, though. It’s all worth it for a healthy baby.

I will share more details in another post, possibly tomorrow, since this post is already long enough. I will write about how we shared the news with our families, more about how I’ve been feeling, more pictures and other happy baby stuff. Thank you for sharing our joy!